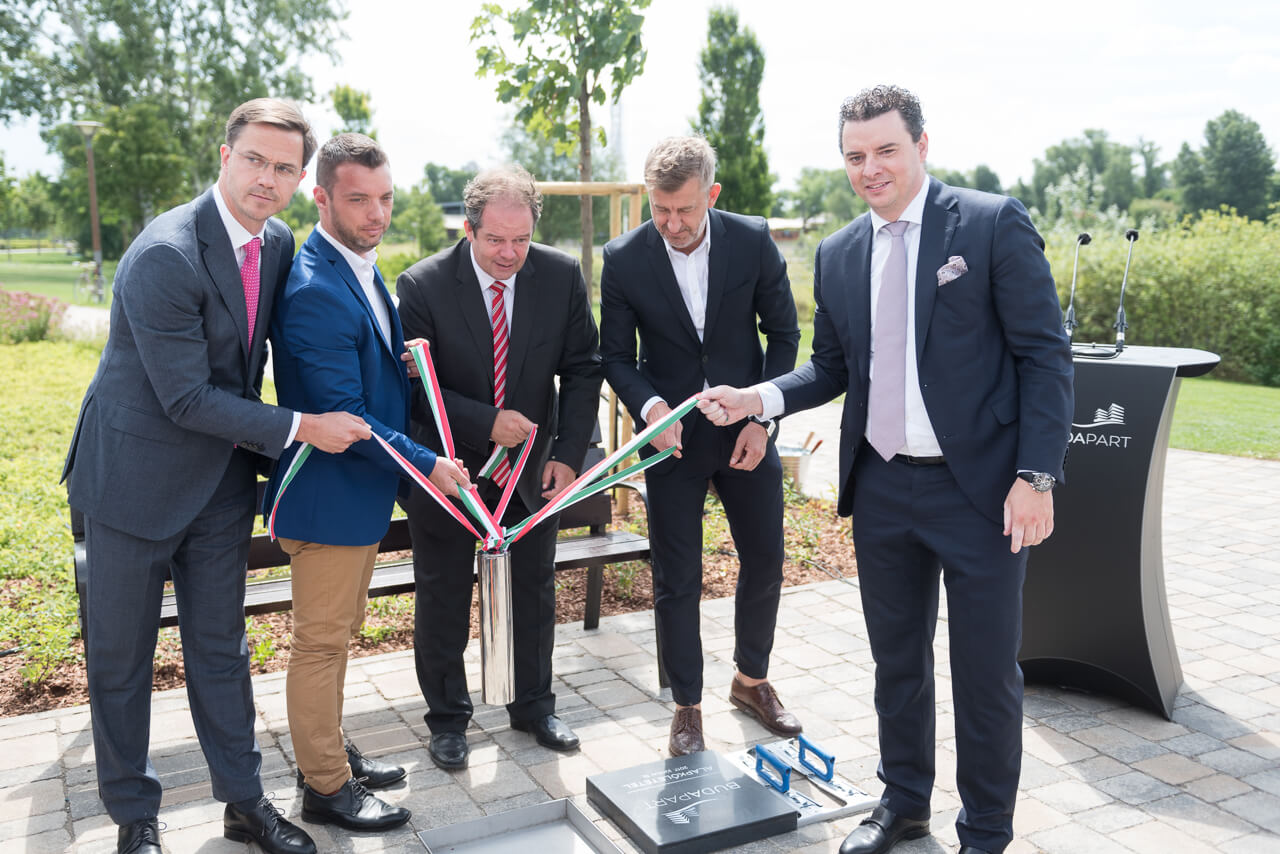 Speeches were given at the ceremony by Balázs Szeneczey,  Deputy Chief Mayor responsible for urban development, Dr. Tamás Hoffmann, Mayor of Újbuda, and by Gergely Árendás, Managing Director of Property Market.

Gergely Árendás stressed in his speech: ”The construction of the BudaPart quarter begins almost a decade after the opening of the public park at Kopaszi gát.  BudaPart has a unique location: close to the centre of Budapest, with an almost 3 km waterfront stretch and at walking distance to the Danube. Újbuda offers outstanding performance both in the residential and the office markets: in the residential market district 11 is one of the most popular parts of the capital where property prices have proved to be ’crisis-proof’ in long term; in fact, they reached above average value gain in the past year.  The percentage of vacant office space is the lowest here in Budapest, only 3.6 per cent.   BudaPart will be a genuine 21st century city quarter which will adjust to market demand and which, with its unique location and recreation possibilities, will combine the benefits of a comfortable home, an inspiring place of work and a venue of recreation. The popular public part at Kopaszi gát will remain open to the public during the entire time of the construction, the public park area will not be affected by the project. ”

Its unique location and the high percentage of green area and water surface make BudaPart a unique project in Hungary. Of the total development area of 54 hectares, 11 hectare water surface will ensure the sound ventilation of the buildings, and the green surfaces in the entire development area will exceed 45 per cent.  By the roads bordering the new quarter office buildings will surround the residential buildings, between the two functions a reduced-traffic shopping street will be built with restaurants and bars, but there will also be several sport grounds, hotel, kindergarten and fitness facilities available to serve the rest and recreation of the residents.

The BudaPart Homes will be delivered turn-key, with fully equipped kitchen.  Building “C” of the BudaPart Offices will be an A-category LEED Gold quality office building with approximately 20,000 sqm rentable space, and it will stand in the main square of the development.  The levels of around 2400 sqm each will provide efficient space use for all types of tenants.

In addition to the construction of the three buildings, the developer will also implement extensive public infrastructure projects. The most important among these will be the reconstruction and expansion of the junction at Dombóvári út and the Rákóczi bridge access road, the construction of an internal road and utility network and the main square of BudaPart. In these infrastructure works almost two hectares of public area will be developed, 7600 sqm public road built or reconstructed,  46 new trees planted and 60 new street furniture installed.

Along with the delivery of the buildings, the public areas will be developed according to a uniform landscape design concept, and the public park at Kopaszi gát will be accessible from the buildings on foot at all times.